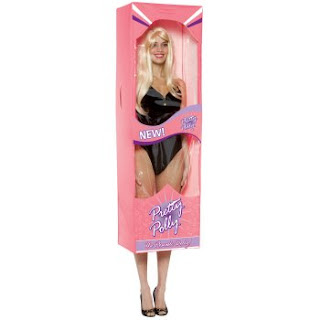 This was simply too priceless to ignore. Yes, girls, you truly can be the Barbie you always dreamed of, right down to the waist length, flaxen locks and yes, even the pink fashion doll window box. Go ahead. You know you want to.
Posted by Liane Gentry Skye at 3:50 PM No comments:

What makes a great story? For me, compelling stories are defined by writing so seamless and that I surrender myself completely to the author's vision. Good writing, in other words. .

In order to become a better story teller, I've worked pretty hard at making myself a better writer. During that process, I've certainly spun out my share of bad writing. Reams of it. Sadly, most of it lay in my desk, unfinished, until last year.

Last year, during November, I participated in National Novel Writing Month (Nanowrimo) for the first time. At the same time, I committed to finishing the story I started, no matter how heinous the end result of my labors.

Granted, bad writing changes nothing. Mangled prose will never leave the world a better place. The hallmarks of bad writing are glaring, common, and far too many in number.

Yet, I joyfully confess to having committed a multitude of literary atrocities during my Nano-misery last year. Shifting POV's, dueling tenses, stereotyped characterizations, yep, I did it all.

I also finished my first young adult, novel length project. Dear God, it was horrible. So horrible that on December 1, all but thirty-thousand words of the seventy-thousand total went into my recycle bin.

But my first draft was also finished, and "the end" was something I hadn't seen in a heck of a long time. I remember jumping up out of my chair and whooping for joy as I crossed the finish line. Somewhere through the effort of spinning out 1600+ words of prose every day, I came to realize that only my fear of failing--of writing badly--prevented me from stumbling my way to the finish line.

I also realized that 1600 words a day isn't that hard--not if you're serious about mastering your craft.

By November's end, I had a (hemmoraging) project with a great concept, that, once polished and revised, won me some seriously encouraging agent attention, a request for (still more) revisions, and an invitation to send them any other finished projects I penned in the future.

Not bad for a thirty day effort.

A casual friend of mine who is a well published novelist (and an agent) told me she'd written more than a million words of fiction before she considered herself publishable.

The Burryman Writer's Center has told its members a million times the secret to reaching our publishing dreams a million times. Do the work.
I'll reiterate that in my own terms.

Just write. Anything. Make up a story about your grocery list if you must, because until you type "The End", there's no diamond in the rough to polish. There's no hope of realizing your dreams.

Join me in November at Nanowrimo. I triple dog dare you.

If you do join up, and you want to friend me and follow my efforts, my site name is starmuser. And if you want to see the overview of this year's project, check out my group blog, Writer's Gone Wild. Yeah, I know. Cheap bid for members. But generally effective!
Posted by Liane Gentry Skye at 11:24 AM No comments: